We are in the final push of manure application season and with it one of the most common questions I get is how does manure move in soil. There are lots of variables that come into play – what’s the moisture content of the manure, what is the soil type, what is the soil structure, how wet is the soil, what sort of injector are we using – and these all can change things a bit, but in general for most liquid/slurry manure applications we tend to see roughly the same pattern.
This may seem a bit silly, but the best way for me to describe that pattern is with a Jell-O Poke Cake, so I sacrificed and Mrs. Manure helped me make a Jell-O cake visual for this occasion (which was brought to work and shared with co-workers). If you’ve never made this cake before essentially what you do is bake it, poke holes in the top with a toothpick, and then pour the Jell-O (while it is still a warm liquid) over it. The cake is a porous structure (similar to soil) and the Jell-O is a liquid-y manure slurry so it works pretty well to make the visual because you get a good color contrast. So take a peak in the photo below to get an idea of what it looks like. 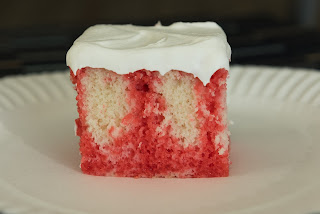 Figure 1. Jell-O cake, or as we call it. Manure injection cake!


So what you see here is a red finger in a sea of white cake. The manure flowed down the injection trench and wicked sideways into the cake where it was held as the Jell-O cooled. Manure movement in soil looks surprisingly similar is surprisingly similar! In the following picture you can see an example of this movement in soil. In this case it was just a blue died water to make the movement more visible. What you see is pretty similar though, the liquid fills the injection slot and then wicks out to the side and downward. The sideways movement is caused by capillary pull from the soil while the downward movement is caused by gravity. The water (manure) keeps spreading out until the soil has enough capillary pull to hold onto what is remaining. When we put manure on, we want the soil to be able to hold all the manure in the root zone, where the nutrients in the manure (the nitrogen, phosphorus, potassium, and others) will interact with the soil particles and hopefully stay there until our crop can use them. 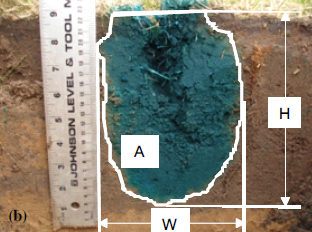 To figure out how much manure we can put on and have this be true we have to consider the different types of water there are in soil – I know what you are thinking, isn’t all the water the same? And it is, but there are different ways that soil can hold onto water – there is hydroscopic water, capillary water, and gravitational water. Hygroscopic water is basically a water over the surface of the soil particles; it is held onto by the soil really tightly and in most cases plants can not pry it off. Capillary water is water held in the small pore space between soil particle. This is the water plants use to grow – it is water that the soil can hold onto tight enough to keep it from draining away but not so tightly plants can’t get it. The final type of water is gravitational water – this is water beyond what the soil is capable of holding onto and it will drain right through. The amount of water in the soil at these points can often be estimated based on soil texture. 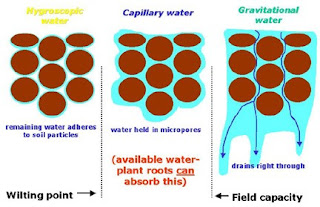 Figure 3. Examples of different ways water is held in soils.


These properties, field capacity, permanent wilting point, and the water holding capacity are generally thought to be related to the soils texture, but can vary considerable based on the amount of organic matter in the soil, the soils structure, and the fields recent tillage and management history. When we look at both field capacity and wilting point, both properties generally increase as soils become more finely textured. This results because the greater percentage of small sized soil particles increases the soils surface area and tends to result in a greater number of smaller pores. The water is held tightly though and much of this water capacity isn’t usable.

Now focus in on the soil’s water holding capacity, this is our usable portion of the soil’s pore space. What we see is that the loams (soils with good mix of sizes but lots of silt) tend to have the most usable pore space. From a manure application perspective, we want our manure, or any rainfall occurring shortly (within about 1 week) of manure application, to be less than that required to bring the soil up to field capacity. This way those nutrients are held in the soil profile so that they can be accessed by plants.
Table 1. Average water holding properties of soils based on texture.
Next we’ll look at an example of liquid manure application and using water holding capacity to set application limits. 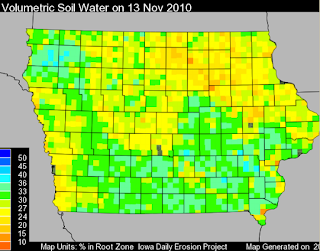 
Let’s say we had a silt loam soil, how much liquid could be added before the soil reached field capacity. We’ll assume that the tile depth is around four feet, but as a safety factor and because we want to limit nutrient movement, we want to apply no more than enough liquid to bring the top two feet of the soil to field capacity. Based on the map above we just looked at we’d estimate that the current soil moisture is about 30%, or 0.3 in/in, which is roughly 3.6 inches/foot of soil.

Silt loam soils generally have field capacities of around 3.7 inches per foot. This means that the soil is capable of holding about another 0.1 inches of water, or roughly 5,500 gallons per acre, in the top 2 feet of soil. However, just because the soil can hold this much more liquid doesn’t mean we can put that much on, there may be an issue with how fast the soil could take it in and how much nutrient would be applied.

Thinking about what this means as you make application decisions can be helpful to make sure you are doing what you should to help keep manure in the field, where you can take advantage of the fertility it has to offer.
Posted by Daniel Andersen at 9:42 AM