Summer is here and its time to check over your manure storage and make sure it will keep your manure where it should, that you'll have to flexibility to manage your manure like the fertilizer resource it is, and to make sure it will keep functioning well for years to come.
Proper management and maintenance is necessary to prevent manure from overflowing or discharging from a storage system. Whether the manure storage is in an earthen tank, a slurry store, or a deep pit, the basic principles to maintaining and managing the storage structure are similar. In any case, frequent evaluation and preventative maintenance will significantly reduce your risk and keep your manure where you want it. 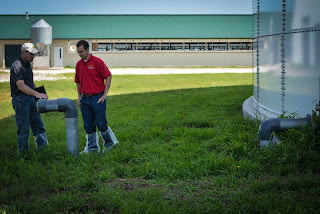 Posted by Daniel Andersen at 8:54 AM No comments:

Carbon - where does the carbon we feed a pig end up?

Wow, June is flying by, already the 19th and I've failed to get a blog article posted so far this month. However, it wasn't for lack of interesting questions coming in. I've had a few, but the one I'm going to talk about this week has to do with carbon and manure.

There are a lot of reason that this topic could come up, often times it is in the context of anaerobic digestion of manures, or potentially using manures to build soil health and soil carbon levels, or event about what the carbon footprint of a pig is. Today’s question hits on all these a little bit as it was “of the carbon that we feed a pig, where does it end up?”

To get this conversation started I’m going to work from a paper by Drs. Steve Trabue and Brian Kerr (they work for USDA ARS) and their work has often focused on the dietary impacts different dietary feed ingredients, feeding practices, and ration manipulation techniques have on odor and gas emissions from swine manure. They have a unique set-up where they perform these studies, sort of a mini-pig barn simulator. Each pig gets an individual pen with a slatted floor. Below that is a screen and funnel system that helps separate the urine and the feces (because, well manure science! that and its sometimes handy to have these fractions separate). Twice per day the pigs are fed and the urine and feces are collected mixed together and put into its own individual manure storage tank (you can see a picture of their set-up below). In addition to that work they’ve also done some carbon, nitrogen, and sulfur balancing to how much of these things being fed ends up in the pig’s body, how much is in the manure, and how much is lost to gas emissions. Their studies last about 40 days and start with fresh manure; because of this their manure emissions for methane may be a little low, but they still give a good starting point. 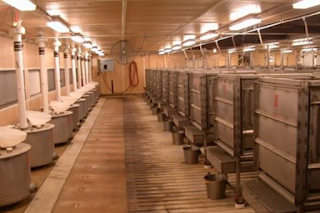 In their study that found that about 9% of the carbon was in the manure when a pig was fed a standard corn-soybean meal diet and about 15% of the carbon ended up in the manure when the pig was fed a ration high in DDGS (dried distillers grains with soluble).  This should be about what we’d expect as adding more DDGS to the diet increases fiber, which isn’t digested by the animal so it ends up being passed through and excreted. In both cases they found that about 20% of the carbon fed to the pigs ended up in the meat; this occurred regardless of diet in their study, but both diets were formulated to provide the same energy. They then suggested that about 60% of the carbon fed to the pig is respired and ends up as carbon dioxide emitted from the pi during breathing. This leaves about 10% of the carbon to be emissions; however, their measured emissions from the manure were about 25% of the fed carbon – sometimes carbon balances are a little messy and in this case they measured more carbon in the animal, the manure, and as manure emissions than the measured in the fed.

Even still, I’d guess that their manure carbon emissions were low – their manure is stored in a clean tank (no inoculation) and for a relatively short period of time (about 40 days). Methanogens are notoriously slow growing so in this study they didn’t have lots of time to develop and consume that organic material in the manure and their measured methane emissions are typically lower than what we’d see in a production swine environment.

When we think about carbon emissions from animal production we often focus on the methane, this is because it is a much more potent greenhouse gas than carbon dioxide (30 times more potent over 100-years). It’s also because we think all this carbon was recently CO2 anyway since it was recently captured by a plant, so if it was all released as CO2 it would be carbon neutral. To get an idea of home much methane we are getting from the pig manure I’m going to talk about some of my work – I was really interested in how much methane is coming from swine deep-pit manure storages. For this work I developed a protocol for estimating how much methane is coming from the manure.  Rather than focusing on the method, I’m going to talk about the results. What I found is that methane emissions from the swine manure storages averaged 12.2 + 8.1 kg CH4 per animal space per year. So lots of variation between sites, which isn’t too surprising considering some pump and land apply their manure 2 times a year and some only once per year. To get an idea of how much methane was being produced from manure per animal I’ve included a figure below. This shows the estimate of methane emission from the manure, but also how variable it was from farm to farm in our measurements. 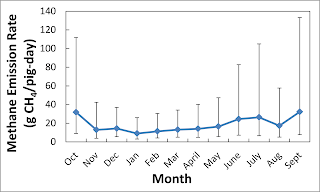 So where does this leave us and what does it mean? There are lots of ways to go with this in the future. First it gives us a baseline for how much carbon the pig will digest and retain for growth. In animal production systems this is a variable we are always trying to improve. New research on how to increase digestibility will continue to make this better in the future, even now we are continuing to find ways to grind the feed finer without creating new problems (like dust or the feed bridging in feeders) and doing this improves digestion in the pit.

However, from my perspective the bigger question is how can this change how we handle manure – and the answers are endless. If we move towards systems where we can capture the methane we will need to ask questions about how to get as much methane from the manure as possible; however, if we continue with systems where we aren’t capturing the emissions we will instead need to find ways to limit how much methane is lost. The good news is we already know there is a big variation between barn-to-barn and farm-to-farm in these emissions; however, answers as to why remain elusive. Getting to the cause of these differences will help in develop of best practices to meet our manure objectives of today, and tomorrow.

Posted by Daniel Andersen at 12:09 PM No comments: