The nutrient density of the manure is one of the most important factor influencing transportation costs. As the largest part of the manure slurry is water, it is natural to consider separation and partitioning strategies that divide the slurry into different fractions. One fraction would be nutrient dense and could be more economically transported away from the animal production facility, and the other fraction would have a low nutrient content that would be applied at high rates on land nearby the production facility. However, if a producer is going to add a nutrient partitioning technology to their manure management system, the costs associated with the installation and use of the system need to be recovered. Potential economic benefits associated with nutrient partitioning technology could include reduced transport and land application costs, smaller manure storages (if a system where the low nutrient fraction could be irrigated onto the land more frequently could be developed), or potentially the recovery of a bedding product that could be recycled for on farm use. Although all three of these factors could be important in justifying the added costs of the nutrient partitioning/separation systems, the work presented here will only focus on the cost modification occurring to manure transport and land application.

The original cost of manure transport and land application can then be compared to the costs of transport and land application when differing levels of manure treatment were obtained. This then gives the performance and cost relationship the nutrient partitioning systems would have to achieve to be a viable option to implement in the farm’s manure management systems.
To do this a model of how application costs vary with manure application rate and transport distance is needed. The first objective of this work was to develop a relationship to describe the costs associated with applying manure and the manure application rate. Our data for this is from Mulhbauer et al. (2008) and are shown in figure 1. In addition to the land application costs, an additional 0.001 $/gallon-mile for every additional mile the manure is transported away from the farm beyond the first mile was assumed. These costs are specific to a farm and more complex than these assumptions I’m using, but offer a useful starting point for the discussion. In many cases the actual costs are strongly influenced by distance from the barn to the field driveway, as well as variables like the size of the field, and how a drag hose could be routed or the path that tank wagons would have to take to get the manure from the storage to the land application area, or even the number of times the drag hose would have to be set and moved to cover the application area, along with numerous other things. Rather than going through the nitty, gritty details of what I’m trying to do instead I’m just going to look at an example. Assume a 4,000 head grow-finish operation. This operation completes 2.5 production cycles per year and has pigs that excrete manure at a rate and nutrient content in line with those suggested in the ASABE manure production and characteristics standard (2005), i.e., 4.5 L/head-day and the manure has nitrogen and phosphorus contents of 0.47% N and 0.18% P (approximately 40 lbs N and 15 lbs P per 1,000 gallons) after storage in a deep pit. Thus at this operation 6,570,000 L of manure are generated per year and 30,879 kg of N and 11,826 kg of P that need to be land applied. Assuming manure application occurs at a nitrogen application limit and 168 kg N/ha are applied (roughly the recommendation for corn following soybean in Iowa), then 184 ha of land application area are required for manure application. The resulting manure application rate would be approximately 35,745 L/ha. Using our previous assumptions (50% of farmable land in corn and 60% of the land farmable) then 613 ha of total land area would be required. Based on these calculations, this example farm would apply about half of the manure within 1 km of the farm and the other half would be applied within the second km. Manure applied within the first kilometer would cost about $0.00458/L for application, while manure within the second kilometer would cost about $0.00478/L. Of the manure, 3,368,857 L would be applied at the $0.00458/L rate and the other 3,201,143 L at the $0.00478/L rate; thus total cost for land application would be $36,475 or about $198.44 a hectare or $0.004675/L.

The results of this analysis (figure 2) indicated that nutrient partitioning techniques could lower the cost of land application with the effectiveness of nutrient partitioning (in terms of total nutrient capture and the volume these nutrients are concentrated in) resulting in different cost reductions. On this graph, the x-axis represents the simple separation index (shown as equation 1) and the y-axis represents the estimated cost of land application, in dollars per liter of manure applied. Each series on this graph represents the percent of total manure volume that ends up in the nutrient enriched fraction. In general, the cost reductions were minimal until either extraction efficiency (the percent of total nutrients captured) was relatively high or nutrients were extracted into a relatively small volume. This figure provides information on what a farm could pay for the nutrient partitioning process; for instance, if they obtained equipment that could partition 60% of the nitrogen in 10% of the manure mass it would reduce the application cost by approximately $0.00068 per L, or the manure application bill by $4,460 per year. 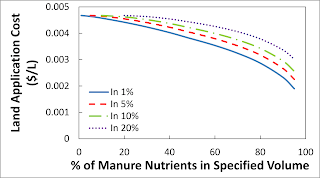 Figure 2. Evaluation of a nitrogen partitioning technology with differing performances to impact the costs of transport and land application of the manure.

So what this method does is provide a quick an easy way to tell if a nutrient separation system would be useful on our farm if we are trying to use it to lower our manure application costs. Next time I’ll take a look at a couple of technologies that are available and see how they’d do at paying for themselves.
Posted by Daniel Andersen at 9:26 AM No comments: