Not Your Grandpa’s Manure Spreader

Another manure application season is arriving, so what better way to prepare than to talk a bit about manure spreader technology? At first, manure spreaders might seem pretty simple – they are used to get manure from point A (the barn or barnyard) to point B (the field). However, they have to do so much more than that.  Manure spreaders not only have to get manure from the barn to the field, but once they are in the field they have to evenly spread that manure over the field.

The early history on manure spreaders is a little shaky, but the general story is they were originally horse drawn and had to be manually unloaded using a pitchfork. Eventually Joseph Kemp, who is credited with developing the first automated spreader (in 1875) developed a new version that unloaded itself. This spreader essentially left all the manure right behind itself, not the most desirable pattern, but definitely better than the backbreaking work of pitching the manure off. Joseph Kemp then sold his design to International harvester in 1906. 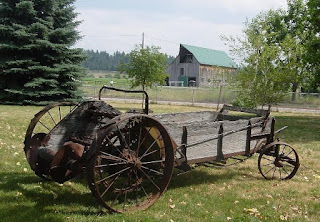 The next leap forward was by Joseph Oppenheim, who’s “New Idea” added paddled beaters at the back that shredded and flung the manure to the side. This created a “widespreading” pattern that more uniformly spread the manure over the soil surface. A lot has happened since then; we switched from horses to tractors for power, made bigger and bigger spreaders, and switched steel wheels to rubber. However, we still often deal with the same challenges - trying to get the right amount of manure applied to a field, getting the manure application as uniform as possible, and trying to do it all as quickly so we can start after our soils have cooled and before they are frozen.

The spreaders we have today have incorporated new techniques to help in hitting the application rate and controlling how much manure is applied, and that is the part I’m going to focus on. I’m going to look at slurry spreaders during this discussion. The rate control consists of 4 basic parts: a rate controller (the brains of the system), a flow meter (the sensing element that measures the variable we are trying to control), a GPS unit to map and sense tractor speed, and then a means of adjusting the flow (often a valve in the system or a hydraulically speed controlled pump). Below I have a schematic that that walks through the parts of the system and how they work with each other. The brown arrows represent manure flows and the black line represent information flows, which are handled electronically or hydraulically.

So the system starts with knowing what rate application rate we are trying to achieve, let’s say its 2500 gallons an acre. We need to enter this into the on-board controller. The controller also needs information on the size of our tool bar. Let’s say it is 8 injectors at 30” centers. This means with every pass we’d cover 20 feet. Finally, the GPS feeds the tractor and spreader speed into the controller. Let’s say it gets a reading of 7.5 mph (660 ft/min). The controller does a little math and says at this speed we are covering 13,200 square feet per minute (or about 0.303 acre/min), so to achieve our desired application rate we need a flowrate of 757.6 gallons per minute. As the system starts up the pump will push some flowrate through to the application toolbar, let’s say the flowmeter reads 1000 gpm. The controller than sends a signal to the actuator to slightly close the valve. It keeps doing this until the desired flow rate matches what we are trying to achieve. Pretty sophisticated controls, but necessary to make sure we are getting the most from our manure fertilizer.

So what’s this look like on a real manure spreader. The picture below shows the side view of a Houle spreader. It is not visible in the front in this picture, but the next one shows the pump in the front of the spreader. As we start applying this pump kicks on and starts manure moving through the pipe on the top of the tank. The grey portion in the pipe, that’s the flow meter, it’s constantly measuring the flow rate of manure and sending this information to the controller in the cab. The controller uses this information, along with the speed of the tractor, the desired application rate, and the width of the implement to determine whether to open or close the valve. You can see the valve and actuator; in this case it a hydraulically closed actuator that opens or closes the valve. 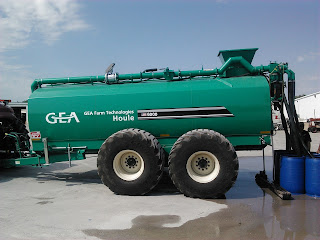 Profile view of of manure spreader. 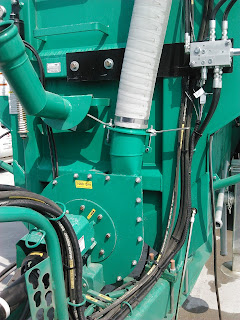 PTO driven pump on the front of the manure spreader. 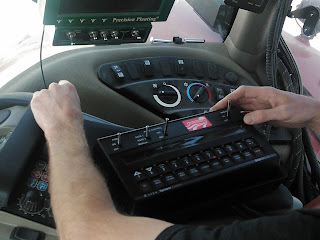 In cab controller that electronically opens and closes the valve to match that actual flow rate to the desired rate.
Posted by Daniel Andersen at 4:38 PM No comments: 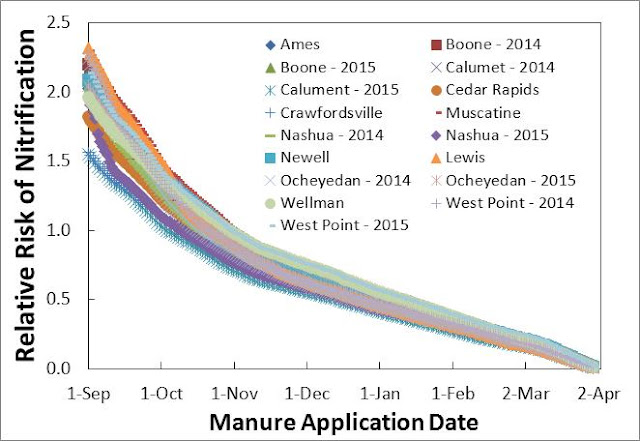 As a reminder, Iowa State University Extension and Outreach maintains a statewide real-time soil temperature data map on their website that ag retailers and farmers can use to determine when fall applications are appropriate. The website can be found at http://mesonet.agron.iastate.edu/data/soilt_day1.png.
Posted by Daniel Andersen at 8:13 AM No comments: