Manure quality is dependent upon management practices and the manure handling system. Though we can adjust an animal’s diet through practices like phase feeding or supplementing specific amino acids, generally only 10-20% of the nitrogen and phosphorus fed to an animal is retained by the animal. The majority of the nutrients are excreted in the manure. Depending on the type of finishing site and your goals as a producer, there are different ways to evaluate manure quality.

At finishing sites, manure handling systems can be separated into 3 types: open lots (concrete lot and earthen lot), deep pit confinement barns, and bedded confinement facilities (hoop barns and monoslopes). While we start with roughly the same amount of nutrients in the manure of the animal, the way the manure is stored, treated, and handled can lead to drastically different nutrient contents. For example, though open lots and bedded confinement facilities both have solid manure, the amount of bedding used in each facility varies greatly. More bedding is used in a confinement facility to absorb liquids than in an open lot. 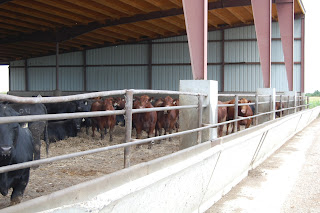 Another consideration is that nutrients can be lost between the time the manure is excreted and it is land applied. In the case of nitrogen, in an open lot, 50-70% of excreted nitrogen can be volatilized, or lost as a gas, while it sits between cleanings. In a bedded confinement urine is soaked up quickly with the bedding, reducing nitrogen volatilization to around 30%. In a deep pit barn since the manure is a liquid, it is easier for the free ammonia to be volatilized. However, since the manure in these storages have small surface area, losses of 15-30% of excreted nitrogen can be expected.

The amount of manure generated by each system varies as well. In general, an open lot typically generates 3.5 tons of manure per cattle per space. However, this number varies greatly due to weather conditions, management practices, site locations, and the moisture content of the manure when scraped. A deep pit systems averages about 6.5 gallons per head per day or about 10 tons of manure per space.  In a bedded confinement, around 6 tons of manure produced each year, assuming it is around 30% dry matter for bedding use.

The summary table below provides an idea of how much of the nutrients are retained in the different manure handling systems.  Deep pits have the advantage, as they hold onto more of the nutrients, but bedded confinements closely follow with the amount of nutrients retained.

Which system you select is also dependent on your application goals. If you are moving manures a long ways, solid manures might be better because they are more nutrient dense, but sometimes liquid manure systems are nice because they are easier to automate. 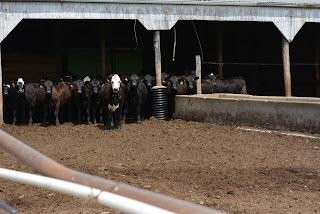 Posted by Daniel Andersen at 3:24 PM No comments:

A few weeks ago I made it home to my parent’s farm. While I was there I jumped at the chance to tour the dairy next door. The dairy is still relatively new and one of the biggest in the area I grew up in. Sure I was excited to see the freestall barns, the parlor, and their recording system for cow health and milk production, but let’s be honest, I was there to see the manure handling system (well that and my family).

So as I get started a big thanks to the dairy for the chance to walk around on a Saturday morning and hear what was going on at your farm. A few facts to get us started. The farm currently has around 2,400 cows and uses a GEA double 35 parlor (growing up we milked about 30 cows so yeah, we could almost fill half the parlor!). Like lots of dairies, this one chose to use sand. Sand can be a clean, comfortable bedding that can promotes conditions for low bacteria counts for mastitis control.
I wrote an earlier post , Can application of sand laden manure impact soil texture?, (available at http://themanurescoop.blogspot.com/2015/08/can-application-of-sand-laden-manure.html), and as I discussed there one of the best ways of avoiding that issue of land applying sand is a good sand recovery system. So, that is the topic for today. In particular, I thought I’d talk and show some sand settling lanes since that is what this farm was using.

There is a lot you can talk about when it comes to sand settling lanes and I won’t cover it all here, just a few pictures and a little science. So I’ll start with the picture. What is a sand settling lane? Well just like the name makes it sound, it’s a lane (think land like a bowling alley lane) where we want sand being carried in our water-manure-sand mixture to settle out. By settle out, I mean the sand hits the bottom and is says in the lane where it can later be scooped out. The sand that is scooped out is then laid out in windrows and turned a few times to facilitate drying of the sand. These steps are shown in the photos below. 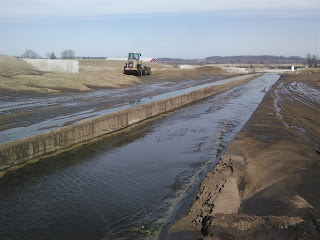 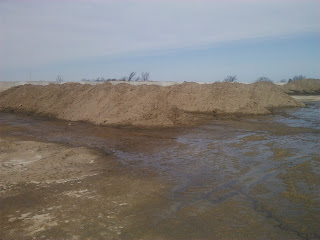 To be successful and make good sand bedding, we want to recover as much of the sand as possible, but not the organic matter in the manure; that is we want to make clean sand.
Now to the science of the settling lane. The idea is to use gravity and density differences to drive the separation. Stokes’ law is often used to describe this, as shown in equation 1.
V=((ρp-ρw )/18μ)*gD^2

Where V is the rate settling velocity of a particle (m/s), ρp and ρw are the densities of the particle and the density of water respectively (kg/m3), µ is the viscosity of the fluid (kg/m-s), g is the gravitational acceleration constant (m/s2), D is the diameter of the particle (m).
Looking at this equation there are a few things you can quickly take away from it. In particular, there are two parameters, the particle density and the particle radius, that influence how quickly particles will settle. It says that big particles settle more quickly and that denser particles settle more quickly. To have effective separation of sand and organic matter what we need is to have a big enough difference in the rate that the organic matter in the manure and the sand in the manure settle so that we only capture the sand.

So, what do we know about the characteristics of sand and manure particles. Almost all sands have particle densities of right around 2650 kg/m3, but the particle size can vary depending on the type of sand you purchase, but typically will have a particle size of around 0.25 mm or so. If you plug both of these into Stokes’ law you get a settling velocity of around 1 m/s.

If we contrast with manure solids the particle density if closer to 1500 kg/m3 (though it does vary with the amount of fixed and volatile solids in the manure (see figure below, note that fixed solids are mineral solids and volatile solids would be organic matter) and dairy manure solids have a geometric mean diameter of around 0.17 mm. If you plug these values into Stokes’ law you get a settling velocity of 0.14 m/s! That is much slower than what we got for the sand particles. As a matter of fact, a dairy manure solid particle could be 0.5 mm in size (which about 70% of all dairy manure solid particles are smaller than) and still only settle as fast a sand particle that was 0.25 mm because the particle itself is so much less dense than the sand particle. 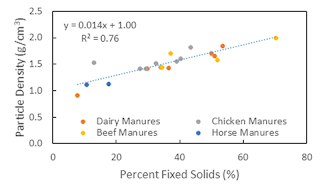 Although it may sound simple, designing and managing the settling land so we are capturing as much of the sand but as little of the organic manure solids can sometimes be a real challenge. So next time you have a glass of milk, sit back and think about all the work, effort, and science that keeps those farms running. I know I will, and maybe I’ll even be tinkering with Stoke’s law trying to think about how changes in season, changes in type of sand used, or how flow, stope and size come together to make a sand settling lane possible.

Posted by Daniel Andersen at 10:45 AM No comments: