In the last month, we've had two tragic accidents related to manure and repairs in a barn. In both cases, a father and son were working on some repairs in the barn near the manure. One of the two either then passes out and falls in the manure or enters the manure and passes out. The other then dives in to attempt to pull the other to safety; neither survives. These are tragic reminders that on the farm we need to think about safety every day in all our activities, especially those dealing with manure.

The decomposition of organic matter in manure results in the release of several gases, ammonia, carbon dioxide, methane, and hydrogen sulfide among them. Although all are potentially dangerous, hydrogen sulfide tends to be the one of most concern in these cases. Hydrogen sulfide has an intense rotten egg smell, so it is relatively easy to detect its presences, even in very low concentrations. However, after breathing it for a short time your sense of smell will become fatigued and you lose the ability to detect it. Just as importantly, since we can smell it at such low levels, there is not a clear indication of when it reaches a potentially hazardous conditions that we can detect without the use of analytical instruments.

In many animal housing facilities, the manure pit is often located below the facility floor. Within these buildings these gases are generally detectable in low concentrations throughout the year; however, under some conditions, such as manure agitation, the gases can be released rapidly from the manure and reach potential toxic levels for people and animals. Even in other systems, where the manure is stored outdoors, toxic levels of hydrogen sulfide can result near and in the manure storage under certain conditions; mostly limited to periods of manure disturbance such as agitation. 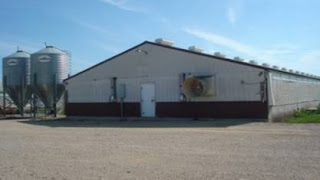 Example of a typical swine barn in Iowa. You can see the barn has an end wall fan for ventilation and is curtain sided. Curtains are raised and lowered to control the barns ventilation. What you might not immediately notice is that underneath the curtain there are a series of pump-out ports (see the lower right of the picture). 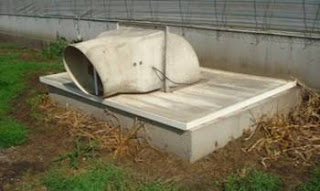 The pit fans provide minimum ventilation requirements for the animals and run almost continuously to help draw ammonia, methane, carbon dioxide, and hydrogen sulfide produced by the manure within the barn.

In the last few years we have been seeing higher sulfur levels in our manure. For example, swine manures used to average about 3 lbs sulfur per 1000 gallons of manure, but recent sample collection from 70 farms within Iowa showed we are currently averaging closer to 9 lbs of sulfur per 1000 gallons. This means our potential for larger sulfur releases are higher and to keep everyone (and pig safe) we will have to put a greater focus on safety.
Posted by Daniel Andersen at 3:02 PM No comments:

Manure: a complete, but not balanced fertilizer

We all know that manures can serve as valuable soil amendments due to its potential to improve soil quality and tilth while proving nitrogen, phosphorus, potassium, sulfur, and numerous other plant nutrients, but in not properly managed and land applied it can also result in negative environmental consequences. Overall, the vast majority of farmers do a great job thinking about how they can best use manure in their farming enterprise and implement techniques and practices to help capture the most benefit as they can. However, as I’ll discuss here, this isn’t always as easy as it sounds.

A comment I often hear about manure is that it is a complete fertilizer. When people say this they usually mean that manure has all the essential nutrient needed for crop growth; however, just because it has the right nutrients in it, doesn’t mean that they are available at the ratio our plants want. This adds some unique challenges to manure management that just don’t exist with other fertilizer options. Take for example a field that needs 150 units of N. If we go down to the co-op and pick up some anhydrous ammonia we can go to our field and put on the needed nitrogen; however, if we use manure to provide the nitrogen we’ll also get some phosphorus and potassium along with it. That is manure is a packaged deal, we can just pick out a chunk of nitrogen and say I’ll take this and leave the rest. The nutrients come as a package deal.

This in itself isn’t an issue, but rarely is the nutrient ratios (N:P:K) in manures such that it matches with crop need. This can occur for a variety of reasons, but the most common have to do with losses of nitrogen during storage. This results in a situation where extra phosphorus ends up getting applied to reach the crops nutrient need. This may not be an issue if we rotate fields that receive manure and wait until our crops have reviewed the extra phosphorus we ended up applying, but this might require using alternative nitrogen sources for several years as we wait for our crop to remove some of the phosphorus.

Alternatively, sometimes when manure is stored outside soluble nutrients, like potassium, may be lost from the manure to a greater extent than more stable nutrients like phosphorus. If the manure is then applied at a phosphorus limiting rate we might end up removing more potassium with the harvested crop than we applied. Repeat this a few times and our soils could even become potassium deficient.

So the next time you hear someone mention manure is a complete fertilizer, just remember that that may not mean it is a balanced fertilizer. Soil testing can be a great tool to help you track what’s happening to phosphorus and potassium levels in your soil, and can serve as a great piece of information when you are planning the best ways to get the most from your manure.


Posted by Daniel Andersen at 4:45 PM No comments: