A few years ago I wrote a post discussing both of these methods for determining nitrogen needs. Since then we've had a few more crop years. This means county yields have been updated and there are newer records in the Maximum Return to Nitrogen calculator so I figured it was time for another look.


A manure management plan is a tool for animal farmers that describes how they plan to place and use their manure nutrients for crop production. The process of filing out a manure management plan makes producers identify the amount of manure they expect their farm to produce, estimate the nutrient concentration in the manure, determine the number of acres that are required for land application, and then detail the amount of manure that will be applied to each available acre. In Iowa these plans are based both on the nitrogen needs of the crop as well as the phosphorus index for each field.

Current Iowa law states, “Nitrogen-based application rates shall be based on the optimum crop yields and crop nitrogen usage rate factor values or from other credible sources. Nitrogen-based manure rates shall account for legume production in the year prior to growing corn or other grass.” Therefore, I’m going to take a minute to compare these options to try to better understand what they mean for manure nutrient management. The first approach to calculating the nitrogen application rate desired to support crop production is the yield goal method. In this approach, the farmer determines the optimum yield of the crop and then multiplies the yield times a crop nitrogen usage rate factor for the specific crop. The required nitrogen rate is then adjusted for ammonia losses during application, the nitrogen availability of the manure, and any previous legume crops grown in the field. The optimum yield for each crop may be set to either the average of the last 5-year county yields plus 10 percent or the average of the highest 4 out of the last 5-year county average.

The other approach is the maximum return to nitrogen. This approach uses economic return to N application found in research trials as the basis for the suggested N rate. The average of N responses accumulated from a population of N rate trial sites is used to estimate the point where net return is the greatest (an example of yield response curves shown below). That is, it identifies the nitrogen the point where the next added unit of fertilizer results in a yield increase that based on the value of corn is equal to the price of that unit of nitrogen. This may sound complicated, but a tool to help with these calculations is available at: http://cnrc.agron.iastate.edu/. Input a corn price, a nitrogen fertilizer price, select your crop rotation (corn-soybean or continuous corn), and select which state or fertilizer region you are in, and the program generates an estimate of what fertilizer rate will give you your maximum return to nitrogen.

So now we get to the important part, how do these two methods compare.
To determine the maximum return to nitrogen we have to estimate a nitrogen price (I used $0.36 per pound) and a corn price (I used $2.82 per bushel) for both a continuous corn rotation and a corn soybean rotation (fertilizer recommendation for the corn phase).

Recently, the Corn Nitrogen Rate Calculator split the state of Iowa into two regions – Main Iowa area, which includes majority of the state, and a Southeast Iowa area, which includes Soil Regions 21, 22, and half of 17 (generally south of highway 92). In the main Iowa area, the results indicated in a corn soybean rotation my maximum return to nitrogen would occur at an application rate of 126 (112-140) lbs N/acre and at  176 (159-190) lbs N/acre in the continuous corn rotation (numbers in parenthesis produce a profit estimated to be within $1 per acre of the maximum return to nitrogen). In the Southeast Iowa region, my maximum return to nitrogen would happen at 142 (129-159) lbs N/acre in a corn soybean rotation and at 192 (179-211) lbs N/acre in a continuous corn rotation. I compared this to the amount of nitrogen that would be applied if the yield goal method was used (the ideal yield was set to the higher of the average of the last 5-year county yields plus 10 percent or the average of the highest 4 out of the last 5-year county average). The manure application you’d pick based on yield goals is summarized in the table below (end of the post). 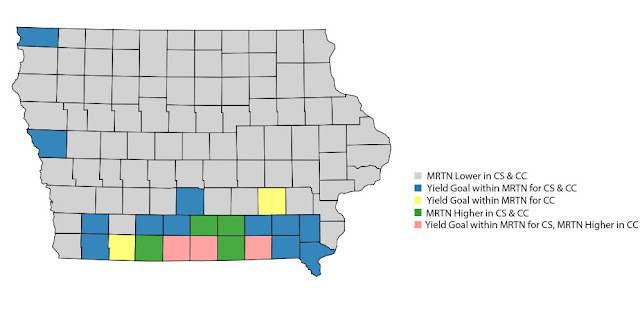 So which method should you use? I think both methods have some strengths and limitations. Conceptually the yield goal method seems really nice as it’s essentially a mass balance approach where we try to supply the amount of nitrogen we will be removing with the harvested portion of the plant as well as what we might be losing to other places. However, in practice, its accuracy is limited by our ability to accurately estimate increased nitrogen cycling resulting from a rotation effect with a legume (especially soybean in the corn-soybean rotation) and in general it doesn’t predict the application rate that will maximize our profit in using nitrogen. On the other hand, in the maximum return to nitrogen approach we have a much better chance of applying at the rate that maximizes the nitrogen value of the manure. However, in addition to just nitrogen, manure also supplies other nutrients like phosphorus, potassium, and organic matter which may impact how we value this nutrient source. Additionally, in some high yield cases, the maximum return to nitrogen approach may recommend nitrogen application rates below what is being removed with the harvested corn grain (about 175 bu/acre in a corn soybean rotation and 232 bu/acre in a continuous corn rotation).

So that’s a fair amount of discussion with no solid answer about which method to use. I think that the maximum return to nitrogen concept is preferable as it attempts to make better use of our nitrogen resources. In general, I’d prefer to write my manure management plan with using the yield goal method, but when it comes time to apply my manure, I’d collect my manure sample, determine its nitrogen content, and adjust my application rate to try to achieve an application within the range the maximum return to nitrogen approach suggests. One benefit of doing this is if it looks like a great growing season we'd still be able to consider side dressing some nitrogen onto our crop and being within the bounds we set in our manure management plan.

Additional resources for selecting your nitrogen application rate can be found at:
PM-1714 “Nitrogen Fertilizer Recommendations for Corn in Iowa” available at: https://store.extension.iastate.edu/Product/Nitrogen-Fertilizer-Recommendations-for-Corn-in-Iowa
PM-2015 “Concepts and rationale for regional nitrogen rate guidelines for corn” available at: https://store.extension.iastate.edu/Product/Concepts-and-Rationale-for-Regional-Nitrogen-Rate-Guidelines-for-Corn


Posted by Daniel Andersen at 11:45 AM No comments: