How much nutrient is there? While it seems a simple question, with manures where the only thing consistent about them is inconsistency, the answer isn't always easy. The place I like to start is what does 'availability' mean.

I define availability as nitrogen present in a form able to be used. When talking about manures, we typically mean that this percent of the nutrient will cycle through a form that plants can use.

I'll use the term supply to specify how much is added; less the fractions are lost to volatilization, leaching, denitrification.

Within the state of Iowa, our go-to document on the subject of nutrient availability is "Using Manure Nutrients for Crop Production," specifically table 1. A second correction is made for ammonia volatilization losses based on the type of manure (as this impacts the amount of nitrogen that is in the ammonium at the time of application) and the application method (as this influences how long the manure it's on the surface and is exposed for potential losses.

Iowa nitrogen management recommendations either come from the Yield Goal Method or the Maximum Return to Nitrogen concept. In the Yield Goal Method. As a base case for comparison, I will look at deep-pit swine manure testing at 50 lbs/N per 1000 gallons. In Iowa, the average yield times 1.1 is 215 bushels/acre of corn and 56 bushels/acre of soybean. Assuming a nitrogen use factor of 1.2 lb N/expected bushel of corn and a soybean credit of 50 lb N/acre, nitrogen application rates would be 208 lb N/acre to the corn phase of a corn-soybean rotation and 258 lb N/acre in a continuous corn rotation. The Corn nitrogen calculator would be 140 lb N/acre in a corn-soybean rotation and 188 lb N/acre in a continuous corn rotation. I'll show a figure of these results in just a second, but I also wanted to compare them to two neighboring states, Illinois and Minnesota. Second-year N availability was estimated in the continuous corn rotation as what didn't mineralize the first year.

Illinois uses the same nitrogen volatilization recommendations as Iowa (they come from Midwest Plan Service) and uses the Midwest plan service method to estimate nitrogen availability from the manure. For swine manure with approximately 70% of the nitrogen in the ammonia form and a 35% mineralization factor, 80% of the nitrogen will be available in the first year. The second-year availability for the continuous corn rotation is estimated to be half of the amount mineralized from the organic nitrogen fraction, which amounts to approximately 2 pounds. The desired Nitrogen application rate for Illinois is selected using MRTN, but rather than the optimum value, the maximum within a $1 profit is recommended.

Minnesota suggests that 150 plant available pounds of N per acre should be applied in a corn-soybean rotation and 195 in a continuous corn rotation. In Minnesota, they don't separate corrections for availability and loss but incorporate both into a correction factor. They also provide a second-year availability factor of 15% for swine manure.

What does this mean? I put together this figure of nitrogen application rate recommendations, two for Iowa (Yield Goal and MRTN), to compare the suggested rates for Minnesota and Illinois. Note this is only for nitrogen and doesn't consider any phosphorus limitations that may restrict manure application. 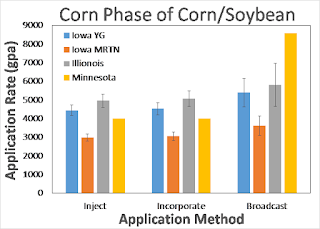 Figure 1. Summary of recommended manure application rates for the corn phase of a corn—soybean rotation. Swine manure with 50 lb N per 1000 gallons, 70% ammonium with error bars set based on high and low suggestions for nitrogen availability and volatilization losses suggested within each state.

As we look at this data, I came home with a few takeaways. The first being, the factor ammonia loss with broadcast application in Minnesota is much higher than in Iowa and Illinois, based on the Midwest Plan Service Methods. Iowa and Illinois have volatilization factors of 15-30%, while Minnesota uses ~45%. The difference in volatilization assumption makes a substantial change in the recommended application rate.

The two recommendations for Iowa make an interesting comparison. When using the yield goal approach, Iowa's recommendations are similar to those provided with the Illinois method. In the case of continuous corn, the Yield Goal method for Iowa tends to be slightly higher, while in the corn-soybean rotation marginally lower, but overall, the results are similar.

When we look at the recommendations resulting from using the MRTN for Iowa, the results are more comparable to the Minnesota recommendations. In the corn-soybean phase, Iowa's MRNT recommendation would be lower thanks to both the lower mineralization suggestion and the slightly higher N application recommendation.

Overall, these results indicate that Iowa's approaches place us within the context of the surrounding states.

Posted by Daniel Andersen at 8:09 AM 2 comments: