As the warm summer heat pushes the corn taller, it seemed a good time to discuss sidedressing manure. Today, I want to look at three potential reasons people may want to sidedress manure:  storage management, nitrogen management, and equipment availability.
So, what is sidedressing manure?
Sidedressing is the application of fertilizer to an already established and growing crop. In the case of sidedressing manure, it simply refers to the fertilizer source being a manure. This can be done using either tanks or dragline application methods, though equipment must clear the emerged corn and move mostly between rows, giving only a short window.
Storage Management
Sidedressing opens up an additional spring window for manure application and thus potentially a chance to reduce storage pressure by having more room available going into fall. However, there are a few things to consider. Sidedressing with manure has a relatively short window. It probably isn’t a good idea to rely on it as your only land application window, as the weather during this short window can be unpredictable. From a nutrient management perspective, if we miss this window we can still get nitrogen applied using other sources and other equipment to provide it fertility, but that doesn’t provide an opportunity to use the manure.
Nitrogen Management
Sidedressing nitrogen allows it to be placed just before corn uptake is maximized and in so doing the risk of losses from earlier spring rains or long warm falls is reduced. There is some risk the weather during the sidedress window will not be suitable for manure application, but as other forms of nitrogen can be applied at larger growth stages, there is still options available to successfully manage the crop.
In terms of manure, though we often think of it as an organic nutrient source, much of the nitrogen, approximately 70% in the case of liquid swine manures, is available as ammonium. This fraction is immediately available for crop uptake and means this type of liquid manure is a good choice for sidedress fertilizers.
Equipment Considerations
While both tanks and dragline application methods can be used, the equipment needs to be set up so it will fit between the rows. For tanks, this means having tire widths that can move between the rows and injectors. For dragline application, it means making sure application is finished during or prior to the V4 stages so the corn plants are still springy enough they can bend over when the hose crosses over them.
If you’d like to try sidedressing manure with a dragline, consider planting corn at a 45-degree angle to the field, so it follows the natural pattern applicators would use with draglining.
Finally, if you are sidedressing manure, be sure to let us know, we’d be glad to come watch, collect some pictures, and even some crop performance and water quality data if you are willing. Let me know at dsa@iastate.edu or 515-294-4210. 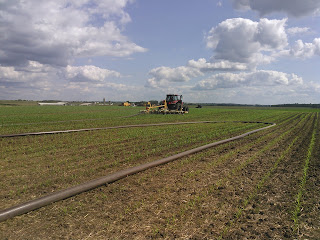 
Posted by Daniel Andersen at 6:49 AM No comments:

Generally, when I’m writing it is about the science of manure, but I thought today I’d write something a little different. Today is the Manure Applicator Training Advisory meeting for the 2019 Iowa Manure Applicator Training Program. Every year we get to interact and share information on manure with about 5000 individuals in this program, help them understand the current state of the industry and the science, and hopefully encourage them to make the best possible decisions on how to utilize their manure.

I consider it a great privilege to help provide this program. Manure is an important topic in Iowa and one that touches on technology and machinery, agriculture and the environment, human and animal safety, soil science, and so many more. There is great diversity in the topics each individual farmer or manure applicator will find important, and the challenge is how do we take what we know about them and their farms, there application companies, current and future regulations, and provide them with knowledge that they find useful, interesting, and engaging.

While I by no means have it figured out, we have been working on engaging, exploring active learning. Last year one activity we explored using active learning was compaction. Those present were divided into teams and set around to discuss and answer four questions related to compaction and how it impacts the manure business. This provided a great chance to stretch their legs, but also some peer-to-peer discussion and a chance for sharing of their experience. You can get an idea of what was happening in the photo below, and while discussion may have started slow, as we went along it picked up and we got plenty of great comments. As we are planning for the upcoming year I thought it would be fun to look back on the activity and see what we heard. 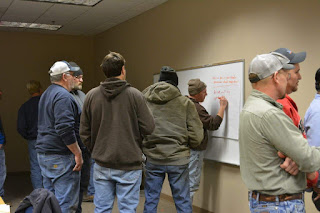 The four questions we asked were: 1. What causes compaction? 2. Why do we care about compaction? 3. What are your or your client’s expectations about compaction? And 4. How can we reduce compaction (primarily related to manure application)? For each of the questions we compiled the answers as a “wordle.” For those of you like me who may not know, a Wordle is a toy for generating word clouds from test that you provide. The clouds give greater prominence to words that appear more frequently in the text, or this case the answers provided at all the different sites. The important thing is that the give a quick and elegant way of providing a visual clue summarize what people were talking and discussing in their answers to the questions. So let’s take a look at what they had to say.

Figure 3. Why do we care about compaction?

Figure 4. What are you or your client’s expectations about compaction?

Figure 5. How can we reduce compaction?

My goal here won’t be to dissect these answers, but you can see that there were themes that emerged and we’ll try to focus more on those, how they relate to the science we do know on compaction, and more importantly how the mitigation strategies they mentioned rely on that science. Overall, though the activity proved worthwhile, provided a few smiles, and we well received, so something we’ll continue to pursue and work on.

Posted by Daniel Andersen at 10:48 AM No comments:

A while back I wrote about why human and animal waste are treated and managed differently. In many respects, this was an economic rationalization why we chose to do things so differently with the same goal in mind, protection of water quality. The foundation behind it was right, but it stopped short of the question I get more often, which one is more effective.

While it’s important to keep in mind that there are good reasons to manage them differently, I’m going to make a simple comparison between the two systems. Granted there is a lot more we could focus on than just BOD (biological oxygen demand, the amount of oxygen needed to break down the waste which tells us something about the risk of a fish kill) and the amount and forms of nitrogen that comes out of each system.

To recap what was covered in the first post, there are significant differences in how human and animal wastes are managed.  Human waste (assumed here to be domestic waste only, no industrial in this post) is typically treated and discharged to receiving waters.  Animal manures are typically stored and land applied.

Several factors influence the difference in approaches including:
The following table compares typical waste characteristics and volumes for a 10,000 population city) and a 10,000 head hog farm, for both total volumes produced and the characteristics of it.

All wastewater treatment plants (WWTPs) must meet the requirements of their discharge permit as part of the Clean Water Act.  Typical permits include limits for BOD, solids, ammonia, pH, and disinfection to kill pathogens.  Focus on the harmful effects of nutrients (total nitrogen and phosphorus) in watersheds (depressed oxygen levels, algal blooms, fish kills) has led to increased regulation of nutrients for many treatment plants, often requiring advanced and expensive treatment processes.  Most treatment plants land apply treated solids and must meet regulations with limits on pathogens, nutrient loading rates and application practices.

While this definition of the process is helpful, what we typically want to know is how many pounds of BOD, N, and P we are allowed to discharge per person. That is what is the actual effect we have?  Looking at the city of Ames wastewater permit, our municipal treatment facility is allowed 2018 lb/day of BOD, and 284 lb D of NH3-N lb of N per day. For fun let’s say Ames has a population of 66,000. This is 11 lb BOD/per person per year and 1.6 lb NH3-N/person per year discharged.  They don’t mention nitrate, but it’s probably about 9.4 lbs NO3-N as very little is denitrified using the current technology they have (though this is subject to change).

Most animal operations, once they hit a size threshold of 1000 animal units, are subject to an NPDES permit if they propose to discharge. Iowa law actually doesn’t allow confinement farms to discharge, so on the point source side the regulations are pretty stringent and the number would be zero except in extreme weather conditions. However, land application of animal manures is an important part of nutrient transport. Let’s work off a pig space, so at 1.2 gallons per day and N content of 60 lb N per 1000 gallons of manure. This works out to about 30 lbs of N per pig space per year, so about 0.2 acres fertilized with the manure. We lose about 30 lb N per hectare as nitrate leaching when we grow row crops, so we are losing about 5 lb N per pig space per year, so about half of what we lose per person. Losses of NH3-N in water and BOD in water are very minimal do to the effective treatment of soil. 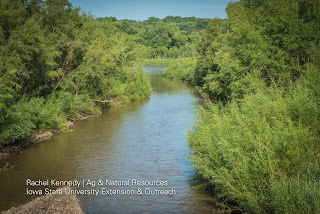 1.      If we didn’t recycle manure as a fertilizer would the nutrient load to streams increase, decrease, or stay the same?
2.      If we say there are no point source losses from collection to storage (a mostly true assumption) how much does manure contribute to the nutrient loading?

If we treated manure like municipal waste, the nitrogen loss actually goes up as we just replace the manure with other synthetic fertilizer (meaning non-point source losses stay similar, though some change is possible). We’d also have additional nutrient loss; though we may remove most of the BOD and almost all the ammonia in the manure, we’d still have nitrate released from the treatment plant into our streams and rivers.

The other interesting take away was that while the two approaches for treatment were drastically different, they both seemed to be equally effective at removing BOD and ammonia from water, but have some difficulty with nitrate though losses per pig space are estimated to be about half of that from a human.

Posted by Daniel Andersen at 1:27 PM No comments: