Yield Goal and MRTN – A look at what these recommendations mean

As you may be aware, Iowa State University has recommended MRTN for determining nitrogen needs for corn for a while now. This methodology uses data from numerous field trials to understand how corn responds to nitrogen in both continuous corn and corn-soybean rotations, as well as the price of both corn and nitrogen to determine what nitrogen application rate will, on average, provide the maximum profit per acre. This is the amount of nitrogen that results in just enough yield benefit to pay for itself in the extra yield it produces.
To get an idea of how this recommendation would have fluctuated with time, I looked retrospectively back at the average annual corn price for every year since 2005, along with the average price of anhydrous ammonia to ascertain nitrogen price. This was done for both corn and soybean rotations. The results did show some fluctuation, but in general, for continuous corn rotations, the recommendation was 190 lb N/acre with 140 lb N/acre recommended in a corn-soybean rotation, with a variation of about 5% in this recommendation based on specific crop and fertilizer prices. Another thing to note, there was roughly a 50 lb N/acre difference between the optimum N application in the continuous corn and corn-soybean rotation. While you might think of this due to a soybean credit, we generally call it a rotation effect.
The yield goal method, which is in the in the Iowa Manure Management Plan forms, uses a mass balance approach to estimate how much nitrogen is needed. In the yield goal method, we use the average of the previous five-year’s corn yields plus 10%. This is then multiplied by a factor, 1.2 lb N/bu corn for most of Iowa, to determine nitrogen need. If in a corn-soybean rotation, a soybean credit is also required which is suggested to be 1 lb N/acre per bu soybean/acre up to 50 lb N/acre. If we look at the N-recommendations over the same time frame, we see something interesting. The yield goal method suggested approximately 144 lb N/acre in a corn-soybean rotation and 188 lb N/acre in a continuous corn rotation, but the variation in the recommendation was higher at 20%. More importantly, while the MRTN methodology has remained relatively consistent, with perhaps slightly lower levels starting in 2000 as nitrogen prices increased, the yield goal method has shown the opposite trend, increasing consistently by about 2.5 lb N/acre-yr over this data set. This doesn’t come as a big surprise, yields have consistently shown an increase over this time phase, but what it is slightly more concerning, is that most data today shows optimum N application rate isn’t actually related to yield as suggested in the yield goal method. 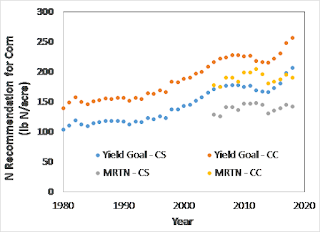 Figure 1. N recommendations for Iowa as a function of time for the yield goal and MRTN method in continuous corn and corn-soybean rotations.

However, let’s look at and explore this another way. You may or may not be aware, but the amount of nitrogen in a bushel of corn has dropped substantially since the yield goal was first developed. In the late 80’s and early 90’s, it was generally accepted that corn had about 0.8 lb N/bushel (based on the USDA crop nutrient removal tool database) while now it has a bit under 0.6 lb N/bushel, at least based on the best data I seem to be able to find. You may wonder how this could happen – and it really comes down to what we use corn for and what we breed it to do. We want it for the starch or energy, both in animal diets and in making ethanol, so one of the things we’ve seen is larger kernels but with the same size germ, so more starch for the same amount of nitrogen. But the more important part is what does this mean to our nitrogen budgets when using the yield goal method?
Let’s take an example of 200-bushel corn (average of last three years in Iowa), 58-bushel soybean and compare our N budgets for when corn removed 0.8 lb N/bu (old removal estimate) and 0.6 lb N/bu (newer removal estimate) using both the yield goal and the MRTN methods. There are a few things to note; most notable, the yield goal method under high and low N content corn suggests N losses ranging from 30 to 70 pounds, which are in the range typically seen for Iowa soils. The MRTN numbers are substantially tighter budgets with allowable losses of -10 to 30 lb N/acre. This may slightly underestimate nitrogen leaching to put us in the approximate range. This suggests the expected nitrogen efficiency in production with the yield goal method was around 84% which is very similar to where the MRTN prediction of 80% now resides.
Table 1. Partial nitrogen budgets for high and low N content corn using both the yield goal and MRTN methods in corn-soybean rotations.

I bring this up because as we try to put a value on our manure, it is important to place it in the context of our best recommendations for fertilization. It is important to consider both past methodologies for estimating need, and why they may or may not continue to be appropriate. For more discussion on this topic, I encourage you to take a look at “A historical perspective on nitrogen fertilizer rate recommendations for corn in Indiana”, which looks at a few more methods than this, but ultimately shows as we learn, we continue to see wisdom in how things were once done, but also in how we need to evolve to stay relevant.