Did you know it is the World Health Organizations Antibiotic Awareness Week? In light of this, I decided it was a good week to look at antibiotic resistance bacteria in manures. Now this isn’t a topic I consider myself and expert on so I’m going to be borrowing heavily from my college at Iowa State, Dr. Michelle Soupir.

Antimicrobials, such as antibiotics, are used in the livestock industry at therapeutic levels for disease treatment. Once the antibiotic has been administered, the animal will begin to metabolize it (break it down), but not all of it is metabolized, some is excreted with the feces and urine, ending up mixed with the manure.  For example, in the case of tylosin about ¾ of the mass administered to an animal ends up in the manure.

Why does this matter? Well once these compounds are in the manure they put a selective pressure on the microbes in it to become resistant to that compound. It is sort of like this, if its cold outside you can stand outside and shiver or you can put a jacket on. For microbes it’s sort of the same thing; the presence of that compound might negatively impact most of the microbes, but perhaps a few of them will figure out to put a jacket on (become resistant to that antibiotic). Then when the manure is land applied as a fertilizer, these resistant bacteria enter the environment. If it happens to be a microbe that makes people sick and they come into contact with it there is a chance that our normal antibiotics might not be as effective for this guy, because it already has some built up tolerance to it. Sure, there are lots of ifs in this case – are they in the manure to start with, how long do they last, does the animal and human antibiotic even work in the same way (similar mechanisms) – but that’s what people are trying to find out. 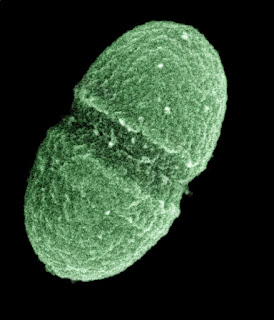 So in a recent study Dr. Soupir performed she tested how swine manure application (fall applied swine manure at 168 kg N/ha, or about 150 lb N/acre compared to spring injected UAN) and tillage practices (chisel plowing versus no-till) impacted the persistence and transport of enterococci; both total enterococci and those resistant to tylosin (a type of bacteriosat that was used at the farm the manure was obtained from). 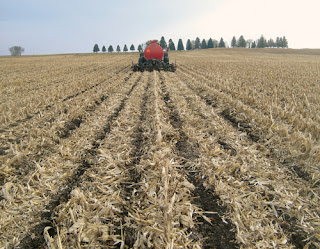 So where does this leave use? At least during this study, when weather conditions were drier than normal for Iowa, it doesn’t appear that manure injection changed the risk of to water quality. However, different weather conditions where it is wetter during and after manure application, may impact these results.

A publication detailing this study is available at:
http://lib.dr.iastate.edu/cgi/viewcontent.cgi?article=1819&context=abe_eng_pubs
Check it out if you are interested in learning more.
Posted by Daniel Andersen at 12:19 PM No comments:

Perennial Forages on the Landscape: Do ruminants lead to alfalfa?

I grew up on a small dairy farm in Central Wisconsin – we milked about 40 cows and had 110 acres where we grew mostly corn and forages. Our forages were always a mix; alfalfa-grass mixes (seeded with an oat covercrop that was turned into oatlage that first year) in our “good” fields, clover mixes in our wetter fields where alfalfa didn’t do as well. In some years maybe even some sorghum sudangrass (often in a hayfield that winter killed that we had to tear up or that corn field that didn’t get planted because it was too wet).

So why an I reminiscing about perennial forages? The Iowa nutrient reduction strategy (Reducing Nutrient Loss: Science Shows What Works - https://store.extension.iastate.edu/Product/Reducing-Nutrient-Loss-Science-Shows-What-Works) says that adding 2 years of alfalfa to a 4 or 5 year rotation can reduce nitrogen loss by 42% and it will help reduce soil and phosphorus loss as well. It provides perennial ground cover for periods of the rotation after all. So the questions that has been on my mind is what would motivate farmers to raise more alfalfa (or actually any perennial forage)? Has it been replaced by another forage like corn silage? I ask these questions because at least one way of potentially getting more alfalfa on the landscape is to encourage more ruminant animal production as they can use the forage to make human food – meat and milk.

To get us started on this conversation I looked at survey data from the National  Agricultural Statistics Service. The first thing I pulled was alfalfa acres by year from 1950 through 2015 in both Iowa and Wisconsin. Back in 1950 there was about 4 million acres of alfalfa in each state, now there is a little over 1 million in Iowa and 1.6 million acres in Wisconsin. When I look at this graph I see some similarities – both states have seen pretty drastic reduction in alfalfa acres over the 60 years shown, but one big difference. Iowa started losing alfalfa acres before Wisconsin did. Iowa alfalfa acres have been on the decline since about 1955, while Wisconsin stayed pretty steady in alfalfa acres until about 1990. So why have these acres been on the decline? 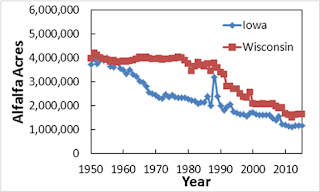 To supplement this I also took a look at corn silage acres, hypothesizing that if we were going to grow less alfalfa perhaps corn silage was replacing it in rations. It was interesting to me that I didn’t really find this at all – Wisconsin corn silage acres today are almost the same as they were back in 1950, and while Iowa’s corn silage acres are also similar to their 1950s levels they are still well below the levels we saw throughout the 60’s, 70’s, and early 80’s. Apparently that wasn’t the missing piece to the puzzle, but then I looked at total corn silage production (tons raised per year), and it held a partial answer – for Wisconsin at least. Though corn silage acres haven’t increased, corn silage production had, especially since 1990 (when we started seeing less alfalfa acre). If you plot alfalfa acres in Wisconsin versus corn silage production you get a petty strong relationship of alfalfa decreasing with more corn silage -  a pretty good indication that corn silage is replacing alfalfa, maybe not on the landscape but in our dairy rations. Better corn silage yields are freeing up land that had been used for alfalfa to grow other crops. So this answers part of my question – more ruminants won’t necessarily lead to more alfalfa on the landscape – but also says it could, we just have to understand what drives the decision of alfalfa versus corn silage a little better (another topic for another post though).

However, it did not answer my question about alfalfa production in Iowa; but if we look at cattle on feed and corn silage production in Iowa we can see that they do trend together. As cattle on feed peaked in the early 1970s corn silage production was growing and peaked shortly after was well. Indicating that corn silage and cattle were linked. This doesn’t explain where our alfalfa acres went, but it does show that  more ruminants won’t necessarily lead to more alfalfa. There are other important factors in deciding between alfalfa and corn silage. 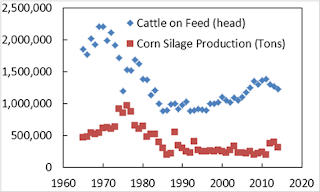 So where do we go from here? Adding alfalfa (or other perennial forages) to the landscape can have numerous water quality benefits and could potentially open additional opportunities for feeding more ruminants. However, based on history it appears the opposite approach, getting more ruminants on the landscape may not have the same effect. That is just because we have more ruminants doesn’t guarantee more perennials for forages. If we are going to strive for more perennials, ruminants can be part of the answer, but it will also require a conscious decision to choose the perennial instead of corn silage.
Posted by Daniel Andersen at 11:20 AM No comments: