Research has indicated that organic matter content in the prairie regions of the United States have declined by 50-90 percent since the land was first cultivated; for soils in Iowa this was approximately a decline from 10% to around 5% organic matter. As soil organic matter can serve as a significant source of fertility, this has led to increased interest in understanding the mechanisms that stabilize organic carbon within soils and management practices that promote building soil carbon levels.

Researcher have hypothesized that soils could be used to sequester additional carbon and prompted researchers to investigate soil carbon storage efficiencies and to evaluate if there is an upper limit to a soil’s carbon stabilization capacity. This has typically been done by applying differing C-inputs to field plots and then measuring C-stocks in the soil. The results in many cases have shown a linear increase in soil carbon with increasing carbon inputs (Huggins et al., 1998b; Kong et al., 2005; Paustian et al., 1997); however, in some long-term agroecosystem experiments little to no change in soil carbon stocks has been detected with changing carbon input levels (Reicosky et al., 2002; Huggins et al., 1998a; Huggins and Fuchs, 1997; Huggins et al., 1998). These investigations have lead researchers to propose soil carbon saturation theory (Six et al., 2002; Stewart et al., 2008; Gulde et al., 2008).
As proposed by Stewart et al. (2007), soil carbon saturation is a soil’s unique limit to stabilize carbon, in other words the maximum amount of organic carbon the soil can accumulate. This concept implies that even with increasing levels of organic matter inputs, the amount of organic matter within the soil would not accumulate. In addition to studying soil organic C stocks under various carbon loading rates researchers have also intensively investigated the dynamics of specific pools in relation to saturation theory (Six et al., 2002; Stewart et al., 2008; Gulde et al., 2008). Three main mechanisms, chemical stabilization, physical protection, and biochemical stabilization (Christensen, 1996; Stevenson, 1994, Six et al., 2002; Sollins et al., 1996; Baldock and Skjemstad, 2000), of carbon stabilization have been proposed. Chemical stabilization refers to intermolecular interactions between organic and inorganic substances (Guggenberger and Kaiser, 2003), physical protection to the accumulation of organic matter due to physical barriers or exclusion of microbes and their enzymes from the organic matter (Jastrow et al., 1996; Six et al., 2004),  and biological recalcitrance to preservation of the organic matter due to structures inherently stable against biological attack (Krull et al., 2003; Poirier et al., 2003). This theory is especially significant for interpreting the results of experiments regarding soil organic matter accumulation as a result of manure application.
When compared to commercial synthetic fertilizers manure nutrient content is relatively dilute. Thus, to achieve a desired nutrient mass application a greater amount of mass of manure than mineral fertilizer needs to be applied. As an example, in Iowa approximately 112-168 kg N/ha (100 to 150 lbs. N/acre) is recommended for corn after soybeans. If our fertilizer source is anhydrous ammonia this translates to an application rate of 136-204 kg anhydrous ammonia per hectare. If manure from a swine facility using concrete storage structures is used to meet nitrogen requirements then an application rate of 16,000-24,000 kg manure per hectare are required (based on average nitrogen content of 58.1 lb N/1000 gallons from Lorimor and Kohl, 1997). At these application rates approximately 1100 and 1650 kg/ha of solids will be applied, of which between half to three quarters (550 – 825 kg/ha) would be organic in nature.
In terms of soil formation and developmen, the application of this organic matter with the manure is most closely associated with the vegetation component. By applying manure, we are adding to the amount of organic residue the soil receives and also adjusting the array and quantity of specific organic compounds that are processed by the soil microorganisms. In general, the amount of land applied organic residue is small in comparison to the amount of residue returned to the soil with a typical corn crop (roughly 18,000 kg/ha of above ground biomass) when applied at an agronomic rate, and yet reports of manures impacts on soil tilth and organic matter levels persist (Nowak et al., 2002). It is possible for small increases in carbon inputs to cause large increases in soil organic carbon levels (see figure 2 diagramming Stewart et al.’s model of soil carbon dynamics); however, this generally requires that the mineral associated pool, i.e., the physio-chemically protected pool to not be saturated. Although work in this area is far from comprehensive, it generally appears that this pool is saturated in most agricultural systems (see Hassink., 1997; Six et al., 2002). 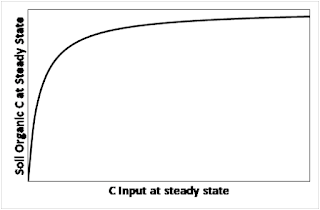 Despite the relatively low levels of organic matter addition, manures may have the ability to improve soil aggregation, aggregate stability and tilth. The work of Celik et al. (2004) showed that the mean weighted diameter of water –stable aggregates was 65% greater for manure and compost amended soils than in soils that received no organic amendment. Similarly, Wortmann and Shapiro (2008) found that large aggregates were increased by 200% or more by both manure and compost application within 15 days after application, with the effect persisting for seven months.  In their study Wortmann and Shapiro (2008) used Bray extractable phosphorus levels to track the new inputs of compost and manure. Using this technique, they noted that the manure and compost generally served to consolidate smaller aggregates into macro-aggregates and that this occurred to a greater extent in the compost amended soil than in the manure amended soil. This indicates that the hierarchical storage structure proposed by Six et al. (2002), who suggested that organic matter would first accumulate in the physiochemical pools and then in aggregate protected fraction, is correct.
This hierarchical storage also supports the theory the layering model for the growth of organic matter in soil of Sollins et al. (2009). In their conceptual model Sollins et al. (2009) suggest that the innermost layer is protein rich as proteins can for exceptionally strong bonds with mineral surfaces (Kleber et al., 2007). Organic molecules can then interact with these surface coatings to bind the particles together as aggregates. One argument working in favor of this hypothesis is that the application of manure or compost is known to increase microbial activity (Spiehs et al., 2010). These microbes produce binding agents that anchor the cells and often coat them with enzymes. The remaining organic matter from the manure or compost can then interact with these enzymes and cement the soil particles together. Using this theory, aggregates can be formed quickly if the surfaces of particles are conditions to bind to the organic matter, would be relatively water stable as it is held together by organic matter, but effects would break down as the organic materials mineralize.
Extending this theory, we’d hypothesize that this would imply that compost application should have greater and longer lasting impacts than fresh manure at an equal carbon loading as the compost would be more stabilized against microbial brake-down than the fresh manure. This additional stability of aggregates in compost amended soils was noted by Wortmann and Shapiro (2008) and provides support for short term improvements in soil tilth and structure from manure application argument. Additionally, we’d expect that tillage would reduce or eliminate these impacts as it allows oxidation of the applied organic matter and that including a cover crop in the rotation would further enhance aggregate stabilization. Both of these practices interaction with manure application were tested by Spiehs et al. (2010), although their survey of hydraulic properties was limited, they did suggest that the benefits of manure application were enhanced in no-till and cover cropping systems.


Overall, these results paint a picture that manure, when managed correctly, can be a beneficial fertilizer that not only supplies nutrients needed to support crop production, but also can be part of a system to improve soil tilth, health, and hydraulic properties.
Posted by Daniel Andersen at 8:59 AM No comments: