Of late, there has been greater interest in soil health, agricultural sustainability, and improving the robustness of our soils to occurrences of drought or heavy rainfall. These concepts often have one thing in common, a focus on increasing soil organic matter as a way to improve soil tilth and structure. This is the case because research has shown that soil organic matter is related to many important soil hydraulic properties, including porosity, hydraulic conductivity, and soil water retention.

Manure application is often credited with improving soil physical properties and associated benefits such as reduced runoff and erosion (Gilley and Risse, 2000; Wortmann and Wlaters, 2006). In most literature the phrase “improved tilth” is cited in manure application studies. Celik et al. (2004) found that five years of manure or compost application increased hydraulic conductivity, porosity, and that available water holding capacity increased by 85 and 56% for the compost and manure application treatments respectively as compared to the control. Many other studies have reported similar increases in soil water retention (Hafez, 1974; Unger and Stewart, 1974; Salter and Williams, 1969; Mbagwu, 1989; Schjonning et al., 1994; Benbi et al., 1998) from the application of feedlot or barnyard manure. Martens and Frankenberger (1992) measured seasonal changes in gravimetric soil water content and found that application of hog manure increased soil water content 3% during the growing season when compared to the soils that didn’t receive the amendment. These improvements in soil water holding capacity and storage have been attributed to several factors including soil aggregation and structure improvements, an increase in total porosity, the direct effect of the addition of high specific surface area material, and even changes in soil texture (Khaleel et al., 1981; Sweeten and Mathers, 1985; Boyle et al., 1989; Haynes and Naidu, 1998).

A comprehensive study by Miller et al. (2002) evaluated the impact of long-term cattle manure application on the hydrologic properties of a clay loam soil. They found that manure significantly increased soil water retention, increased ponded infiltration rates by more than 200%, and saturated hydraulic conductivity increased, but found that manure had little to no effect on the unsaturated hydraulic conductivity of the soil. Similarly, Bhattacharyya et al. (2006) found that manure application increased infiltration rates. They attributed the changes to a better pore size distribution, which appeared to infer an increase in larger pores, but which isn’t clearly articulated within the manuscript. Based on this sampling of literature, it appears there is a general consensus that manure application has neutral to beneficial impacts on soil hydraulic properties, but questions as to the cause of these modifications remain.

In general, these changes are similar to those that would be suggested with increased soil organic matter content, as these studies suggested that manure leads to improved tilth, greater porosity, hydraulic conductivity, and increased soil water holding capacity. In the next Manure Scoop we’ll take a look at the evidence to support that manure is building soil organic matter and then do some back of the envelope math to evaluate what this may mean for Iowa soils. 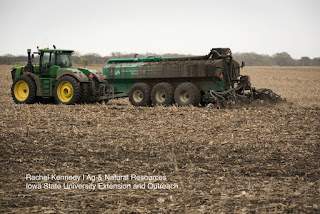 Posted by Daniel Andersen at 3:07 PM No comments: