When I first started really thinking about the how’s and why’s of how manure is managed one of the best papers to my line of thinking was “Making economic sense of why swine effluent is sprayed in North Carolina and Hauled in Iowa” by Roka, Hoan, and Zering. This paper was written a few years ago, but really what it’s trying to do is understand why people make the decisions they do and trying to look at the economic options from the perspective of each location. The paper does a lot of fancy economics (it was written by economists after all), but in the end it basically says Iowa soils are really good, they grow high value crops, and as a result have a greater need for nutrients and value their manure.

I don’t want to delve too deeply into what they wrote, but instead wanted to focus on something related to it. Manure values aren’t static with time, production practices change, fertilizer prices change, and maybe even our need for these nutrients change. As they do the value we can get from our manure values with it. Over the last couple decades we have seen some pretty big changes in the swine industry, we’ve seen most farms move to we dry feeders, we’ve seen some ration changes that include more DDGS, and we’ve seen increased use of phytase in these rations. Start adding these things together and you get some pretty big changes in manure properties, some increasing nutrient content and some potentially reducing phosphorus content. Along with this we’ve seen some pretty drastic swings in fertilizer prices. This got me thinking – how as the value of swine manure in Iowa changed.

The first figure I have for you is average concentrations of N, P2O5, and K2O in swine finishing manure as a function of time for 2000 through 2015. Starting in 2010 we begin to see a pretty pronounced increase in the manure’s nitrogen content and while P and K have increased, not nearly as much. This has lots of benefits – it means lower application rates to get the same nutrient application, less water to move around to get those nutrients to our field, and even N:P ratios that are more closely aligned with the crop need. 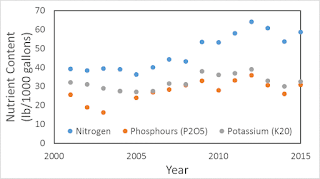 If you start looking at what this means for nutrient value in the manure you’ll find that until around 2005 manure nutrient values were only around $10 per 1000 gallons, but starting in 2007 values skyrocket as nutrient concentrations increased along with higher fertilizer prices. Although it may not be quick as high as back in 2011 when it reached over $50 worth of nutrient value per 1000 gallons, but it still is in excess of $30. To me this means the message stated about the economics of manure management in Iowa that Roka, Hoan, and Zering first presented is even more true today – take advantage of this natural fertility source that that is a more cost effective source of fertility than ever before. 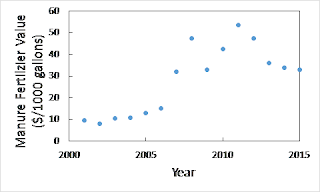 Posted by Daniel Andersen at 10:00 AM No comments: